Heralds of the Gospel

In her third appearance on July 13, 1917, the Blessed Virgin asked that Communions of reparation be made on the first Saturdays of five consecutive months. 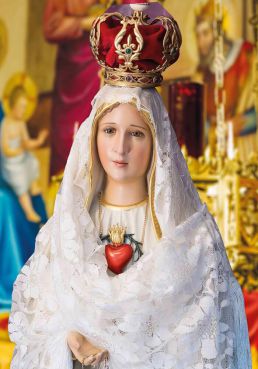 The Blessed Virgin appeared again to Sister Lucia on December 10, 1925, at the convent of the Dorothean sisters in Pontevedra, Spain, with the Infant Jesus, saying:

Look, my daughter, at my Heart, surrounded with thorns with which ungrateful men pierce me every moment by their blasphemies and ingratitude. You at least try to console me and say that I promise to assist at the hour of death, with the graces necessary for salvation, all those who, on the first Saturday of five consecutive months, shall confess, receive Holy Communion, recite five decades of the Rosary, and keep me company for fifteen minutes while meditating on the fifteen mysteries of the Rosary, with the intention of making reparation to me.”

The Child Jesus again appeared to Sister Lucia on February 15, 1926. She explained the difficulty that had to go to confession on the first Saturday and she asked that confession made within eight days be valid. Jesus answered, “Yes, that it could be even more days provided that one receiving me is in the state of grace and has the intention to repair the sins against the Immaculate Heart of Mary.”

Many have had the same question that Sister Lucia made to Our Lord, who replied: “My daughter, the reason is simple: there are five kinds of offenses and blasphemies against the Immaculate Heart of Mary:

– Blasphemies against the Immaculate Conception

– Against Her Divine Maternity and, at the same time, refusing to recognize her as the mother of men

– The blasphemy of those who seek to sow in the hearts of children indifference, contempt or even hatred for this Immaculate Mother

– Those who directly insult her in her Holy Images.”

Mary loves us so much; she helps us continually; she patiently endures our infidelities, and through the devotion of reparation of the first Saturday of every month she provides us an opportunity to placate Her wounded heart after mankind’s offences and ours as well.

Our hearts should not harden, and we should not be indifferent, and we should throw ourselves at the feet of such a devoted Mother and ask for forgiveness for sinners, and for peace for the world every first Saturday.

We encourage you to join us in spreading this devotion and establishing the “Communion of reparation” throughout as many dioceses and parishes as possible so that we can conquer the world for the Immaculate Heart of Mary!

First Saturdays Devotion with the Heralds of the Gospel

In Montreal:
Mary Queen of the World Cathedral
12:10pm Mass and confession
Meditation and Rosary after Mass

The Heralds of the Gospel is an International Association of Christ’s Faithful of Pontifical Right, the first to be erected by the Holy See in the third millennium, on the occasion of the Feast of the Chair of St. Peter, February 22, 2001. In Canada, our communities are located in the Archdiocese of Toronto and the Archdiocese of Montreal.