Send the Spirit of Mary Most Holy!

Just as it was around Mary that the disciples of the Lord were prepared to receive the Holy Spirit, it is close to her that we will receive the deluge of fire of pure love that will soon be poured out over the whole earth. 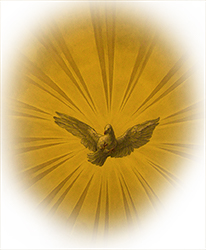 The wind blows where it wills, and you hear the sound of it, but you do not know whence it comes or whither it goes; so it is with every one who is born of the Spirit” (Jn 3:8), Jesus said to Nicodemus, in their famous nocturnal conversation.

And in bidding farewell to His disciples, at the Last Supper, He adds: “And I will pray the Father, and He will give you another Counsellor, to be with you for ever, even the Spirit of truth, whom the world cannot receive, because it neither sees Him nor knows Him; you know Him, for He dwells with you, and will be in you” (Jn 14:16-17).

Who is this Spirit of God, in whom Christ bids us to be reborn? Who is this Advocate and Defender promised to those who follow Jesus?

If we contemplate the successive historical eras, we find Him guiding and leading the souls of the faithful, acting in ways that are at times unexpected and mysterious, yet always sublime and beneficent. His most powerful action is almost always exceedingly discreet; in order to perceive and to understand it, we must have recourse to the teachings of Theology.

Mystery incapable of being understood by natural reason

Among the truths that the Holy Church teaches, the mystery of the Most Holy Trinity holds a pre-eminent place. It is “the central mystery of the Christian faith and life. It is the mystery of God in Himself. It is therefore the source of all the other mysteries of faith, the light that enlightens them.”1

It was by the revelation of Christ that we knew God was one in essence and triune in Persons, for natural reason could never come to this conclusion, as it can only know “what belongs to the unity of the essence, but not what belongs to the distinction of the Persons.”2 Were it not for His becoming Incarnate, we would adore an infinite Being, Creator and omnipotent, of which we would know very little.

Thus, Jesus came into the world not only to redeem us, but also “with the intention of bringing us to know reality, the reality of His existence.”3 Being among us, He revealed the mysteries of His Person and His Kingdom.

Even so, it is impossible on this earth to completely understand the Unity and Trinity of God. This mystery will only be unveiled in the beatific vision, when we will understand Him as He is, although “totus sed non totaliter,”4that is, as a whole but not wholly. “For now we see in a mirror dimly, but then face to face. Now I know in part; then I shall understand fully” (1 Cor 13:12), as the Apostle affirms.

Of the three Persons of the Blessed Trinity, the Holy Spirit is the least known. St. Paul testifies to this when, arriving at Ephesus, “he found some disciples. And he said to them, ‘Did you receive the Holy Spirit when you believed?’ And they said, ‘No, we have never even heard that there is a Holy Spirit’” (Acts 19:1-2).

Perhaps if this question was posed in our days, the reply of many of the baptized would be the same. And this should not surprise us, for one of the greatest Dominican theologians of the past century entitled his book dedicated to the Third Person of the Blessed Trinity, The Great Unknown: the Holy Spirit and His Gifts.5

“Mission” of the Holy Spirit: to act over souls

Although always inseparable, to each of the three Divine Persons can be attributed something like a distinct “mission.” Based on Revelation, Theology says that the work of creation is attributed to the Father (cf. Eccl 1:8); to the Word is entrusted Redemption (cf. Heb 9:11-12); and to the Holy Spirit the sanctification of souls (cf. 1 Cor 6:11).

God dwells in the soul in the state of grace. And “this indwelling is by preference attributed to the Holy Spirit, not by His special presence exclusive from the Father and the Son, but rather by fitting appropriation, as this is the great work of God’s love for man, and the Holy Spirit is the essential love within the bosom of the Blessed Trinity.”7

In union with the Father and the Son, the Holy Spirit is, thus, the “soul’s most welcome Guest.”8 He resides there as in a true tabernacle and transmits the effects of the Redemption, developing, cultivating, perfecting and bringing to fruition the infinite merits obtained by Our Lord Jesus Christ during His Passion.

“He takes the soul and dwells therein, working on it from within.”9 And this does not happen in a static manner: we are constantly inspired by interior motions, graces and supernatural impulses, evident manifestations of an intense action of this gift of God, the Holy Spirit, directing and guiding those who do not close the doors of their heart to Him.

He “does not dwell in our soul in a passive and inoperative way, but to carry out an exceedingly lively activity within it, aimed at perfecting it, step by step, and guiding it, provided it offers no obstacles to the divine action, to the most lofty heights of union with God, in which sanctity consists.”10

The great St. Louis-Marie Grignion de Montfort, in his renowned Treatise of True Devotion to Mary, raises an interesting Trinitarian question: he says that the Holy Spirit “does not produce any Divine Person.”11 Nevertheless, he goes on to say that He became fruitful in taking Mary as His spouse, for in her He produced Jesus Christ. And it is also in her that He “by grace begets all the children of God.”12

Therefore, with the fiat of Mary Most Holy (cf. Lk 1:38) the greatest miracle in history took place. Her yes was an act of obedience to the will of the Most High, which wrought in her the Divine Motherhood, the Incarnation of the Word, by the work of the Holy Spirit. How splendorous the Virgin became at the moment of her betrothal with the Third Person of the Blessed Trinity!

Most loving Mother of the nascent Church 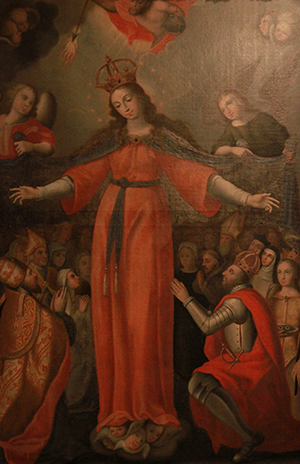 And as Jesus came into the world through the Most Holy Virgin, “it is also through her that He must reign in the world.”13 From the beginnings of Christianity, the sublime role of Mary has been revealed in an evident manner.

In one of his Gospel commentaries for the Solemnity of Pentecost, Msgr. João Scognamiglio Clá Dias explains that “the human being, vitiated after original sin, is not inclined to lifting his sights to higher truths.”14 He tends to turn his gaze to the most trivial and mediocre aspects of life, forgetting the magnificent vocation to which we are all called of being children of God.

Now, “this problem is heightened among those who have a special vocation, as occurred with the Apostles: they failed to perceive that theirs was the greatest mission in history.”15 After the Crucifixion of Our Lord Jesus Christ, they spent some days in the grip of fear. The Master appeared to them resurrected on several occasions, but they lacked the efficacious graces needed to be changed into the heroes of the Faith they were destined to be.

However, while fearfully hiding in the Cenacle, with doors and windows locked, the Apostles were not alone: “All these with one accord devoted themselves to prayer, together with the women and Mary the Mother of Jesus” (Acts 1:14). The moment had arrived for her to show herself as the most loving Mother of the nascent Church.

The Ascension of Jesus into Heaven was necessary, so that His disciples, with the help of the Blessed Virgin, would rend asunder a type of accursed tether that bound them to earthly things, impeding them from soaring, and would, with her, prepare for the definitive break with the spirit of the world and earthly things. This took place on the day of Pentecost.

Transformed by the fire of the Spirit

Having already interiorly moved their souls, for they remained together in prayer, the Holy Spirit entered the Cenacle in the form of tongues of fire (cf. Acts 2:2-3). A great flame descended upon Mary and then divided into several smaller flames which rested over each of the Apostles.

Fortified by the fire of the Spirit, the Apostles and the disciples began to preach with such enthusiasm, strength and conviction, that some accused them of being “filled with new wine” (Acts 2:13). Nevertheless, it was not a material drink that had enraptured them, but rather “what the language of the Liturgy calls ‘the chaste inebriation of the Holy Spirit’: an enthusiasm born not of intemperance, but of a plenitude of temperance, which makes the soul, entirely master of itself and dominated by God, utter such sublime words and say extraordinary things.”16

The descent of the tongues of fire were visible to the eyes of mortals, not as a way of showing the substance of the Spirit, “as invisible and unchangeable as the Father and the Son, but so that the hearts of men, touched by things seen outwardly, might turn to the contemplation of those manifestations always present in His hidden eternity.”17

Moved by the impetus of the Paraclete, the Apostles went out to preach the Good News to all nations, fulfilling the mandate of Christ (cf. Mk 16:15). New Christians appeared, who courageously confronted dangers and persecutions, the rejection of governors and the majority of the people, as well as the heresies that arose within the bosom of the Church from earliest times. At every moment, the Defender raised up souls ready to fight for the glory of God and to combat the evils of their time.

Renew the face of the earth!

Today, we could ask ourselves: in what state is the present world? An enormous crisis reigns and is spreading. The absence of love of God, and the resulting violation of His Law, is grave and widespread. Could the Holy Spirit have closed His eyes so as not to see the calamities of our days?

Like Peter, we “wait for new heavens and a new earth in which righteousness dwells” (2 Pt 3:13). This necessitates a new coming of the Holy Spirit, who will renew the face of the earth and enkindle in souls the fire of zeal for the house of the Lord (cf. Ps 69:9).

“It is time for the Lord to act, for Thy law has been broken” (Ps 119:126), the Psalmist says. At an unexpected moment, the Paraclete will return with great power to banish evil from the world with His purifying fire and to restore all things in Christ.

And just as it was around Mary Most Holy that the first disciples of Christ were prepared to receive the Spirit, it is close to her that the present generations, much more broken than the Apostles, will unite to receive the “fiery deluge of pure love with which You are to set the whole world ablaze and which is to come, so gently yet so forcefully, that all nations […] will be caught up in its flames and be converted.”18

This is the same request the Church has made for so many centuries: Lord, send forth Thy Spirit and renew the face of the earth. And since Jesus wishes to be among us by means of Mary Most Holy, we should add this supplication: O Jesus, send the spirit of thy Mother, the Virgin Mary, and renew, through her, in her and for her, the face of the earth! ◊

3 CLÁ DIAS, EP, João Scognamiglio. Homily on the Solemnity of the Most Holy Trinity. Caieiras, 30 May 2010.

Diverse – Heralds of the Gospel Magazin