Just as love for one’s neighbour is truly demonstrated by external acts and faith is manifested through works (James 2:14-18), so also we should not hide the light of our faith under a bushel (Matthew 5:14–15, Mark 4:21–25 and Luke 8:16–18). Imbued with the desire to give public witness of our faith in the world and of our consecration to the service of the Church, the Heralds dress in a manner that reflects the ideal of sanctity to which every baptized person is called. This witness is a powerful form of evangelization.

In an age “which is often very secularized and yet sensitive to the language of signs”, the Church “seeks to make visible her presence in the world” and has the right to expect that consecrated persons bear clear witness to their faith. “The habit is a sign of consecration” and using it the Heralds become “true signs of Christ in the world.” (Vita Consacrata 25).

The persons who made the first attempt in common life – at a former Benedictine house that would later become the motherhouse of the Heralds – were all members of the Carmelite Third Order, and so they wore a brown scapular over a full-length brown tunic. In memory of its Carmelite roots the Heralds continue to wear the brown scapular as part of their own habit.

The sober and austere brown tunic is reserved for the clerical members, priests and deacons, of Heralds of the Gospel, while the consecrated laymen use a white tunic. Young people, who are beginning their vocational experience, use the an beige colored tunic and scapular. The consecrated women, on the other hand, use the brown scapular over a golden colored tunic.

The cowl used by the clergy and consecrated laity living in community is a sign and constant invitation to a life of contemplation through prayer and listening to the voice of God speaking in their interior. 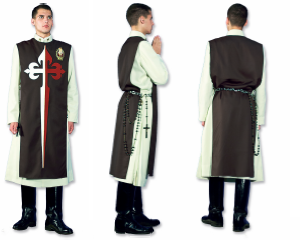 The cross use by the Heralds is inspired by the cross of Santiago de Compostela: the quintessential symbol of the pilgrim in search of the Father’s house. This cross has been slightly stylized to represent the flowers that blossom from the cross; that is, the pain and suffering symbolized by the cross and spikes, when borne with a Christian spirit of hope, blooms into joy and sweetness. The colors of the cross have also been changed. While the original is entirely red, the cross is red and white, vertically divided by a golden band. White represents purity of mind and body, the image of the innocence of the Immaculate Lamb; red love and sacrifice, until the total holocaust of oneself, as the shedding of precious blood of Sacrificial Lamb; and gold the beauty and excellence of the state of holiness to which all the baptized are called by Christ the Saviour. The cross extends the full length of the scapular worn by the Heralds, from the the shoulder until the knees, indicating that those who want to follow Christ must learn to bear the cross in its entire length, as commanded by the Divine Master: “If someone one would come after me, let him deny himself, take up his cross and follow me” (Luke 9:23).

The chain, worn around the waist as a belt, represents the “true devotion” to the Blessed Virgin preached by Saint Louis de Montfort. He invites devotees of Our Lady to consecrate themselves as “slaves of love” to Jesus through Mary’s hands and to demonstrate this act of devotion by wearing a small chain on one’s wrist or neck. This devotion was very dear to Saint John Paul II, who proposed Mary as the example of submission to God’s will at the Annunciation: “Behold the handmaid of the Lord” (Luke 1:38).

If unceasing prayer (1 Thessalonians 5:17) is the most effective means to obtain favors from God (Luke 11:9), the Blessed Virgin assures us that the Rosary is among the most powerful, and its efficacy has been repeatedly demonstrated throughout history. Saint Pius X considered it “the most beautiful and most valuable of all prayers,” and Saint John Paul II called it “the greatest weapon of a Catholic.” Following the example of various religious orders, the Heralds carry a large rosary on their chain. Everyday they recite all four mysteries of the rosary.

Perhaps the part of the Herald’s dress that arouses the most curiosity are the boots. The men use black boots, while the women use burgundy colored boots. The raison d’être is neither a need nor a special purpose. They are a symbol; they convey a message – indeed the entire habit does -they represent the missionary, who knows is not constrained by limits or by boundaries, by distances or by obstacles. In the rain, in the mud, on the road or crossing open fields, the Heralds are constantly called to respond to the challenge of Saint Paul when he wrote: “Woe to me if I do not preach the Gospel” (1 Corinthians 9:16).

Therefore using the habit every Heralds finds an efficacious tool for the apostolate and, in the language of symbols, the expression of what they strive to be and do. However, the use of the habit is the prerogative of those who live in community, and so, in spite of their desire, the young people who participate in activities promoted by the Heralds can only start using it once they have begun to live in community, even if only on a trial basis,  and it has been properly bestowed in a ceremony.

To protect themselves against the cold and inclement weather, the Heralds will wear a cape over their habits.  Their are several types and styles depending upon the habit used by the Herald and the circumstances in which it is used.

On special occasions, such as solemnities and feast days, a white cape with a deep red interior lining and cross on the left shoulder will be used.

In ordinary circumstances, those who wear the beige colored tunic use a similarly colored cape.  On the other hand, clerics and laymen use a deep blue cape over their respective brown and white tunics, while the women use light purple cape.

Moreover, there is special waterproof cape for use in the rain.

Besides this dress, there are three other types of uniforms: