Previous Next
The Three Gold Coins 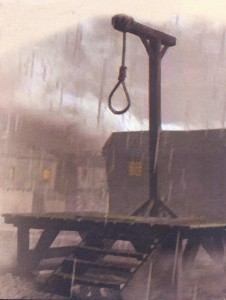 He was a fellow just like you and me, a man neither better nor worse, a poor devil of a sinner.

What had he done? I don’t even know. One mistake more serious than the others, one sin darker than the others, on a day, when God, no doubt, had left him on his own for too long. And, in this good city of Toulouse, between the judges and the executioner, the outcome awaited the morrow. The hangman’s noose was anticipated by a mixed crowd of the curious and of street urchins.

On this day it also happened that King Rene made his entry into Toulouse, with his wife, the beautiful Aude, whom he had recently married in the neighboring country.

As she rode passed the hangman’s scaffold, the Queen saw the condemned man, already mounted on the gibbet, his head already in the noose.   She could not restrain herself but cried out, loudly, and covered her face in her hands.

The King halted his cortege and signaled to the executioner, and turned toward the presiding judges.

“Honorable gentlemen”, he called out, “The Queen requests, by way of your welcoming us to your city, that you grant this man his freedom.”

But the Consuls replied, “This man has committed a crime for which there is no pardon. Although we wish very much to grant the Queen her request, the law demands that he must be hung.” 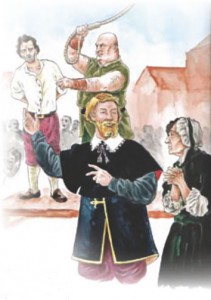 “Is there a single crime in the world which cannot be forgiven?” timidly asked the beautiful Aude.

“Certainly not.” replied the King’s Counsel. But he pointed out that, according to a traditional custom of Toulouse, a condemned man could purchase his freedom for the sum of a thousand gold coins.

“This is true.” answered the assembled judges, “But where could this wretch obtain such a fabulous sum?”

The King opened his pouch and shook out eight hundred gold coins. The Queen searched her purse thoroughly but could find only fifty pieces of gold.

“Gentlemen”, she said, “we have eight hundred fifty ducats. Is it not enough for this poor man?”

“The law demands a thousand ducats”, the inflexible magistrates responded.

Then, all the nobles in the royal entourage assembled, to each give what they could, to make up the total sum.

The Queen cried out in great indignation, “How could it be that for three ducats this man would be lost!”

“It is not we ourselves who require this”, replied the assembled judges, “But this law cannot be changed.” And they signaled the executioner to proceed. 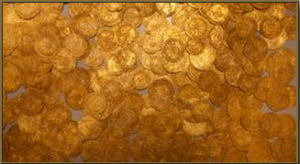 “Halt!” called out the Queen. “Dig through the pockets of this poor fellow. Perhaps he, himself, will be found to have the three coins!”

The executioner obeyed her. He rummaged through the clothing of the condemned man and discovered, in the poor devil’s pocket, three gold coins!

The man you see before you, in this tale, in great danger of being executed… he is you, he is me, and he is sinful humanity.   On the day of final Judgment, we will be in great need of the mercy of God, the intercession of the Blessed Virgin and the merits of the Saints. But even these cannot save us if there cannot be found within us at least three gold coins of good will!