In her third apparition on July 13, 1917, the Blessed Virgin asked that Communions of reparation be made on the first Saturdays of five consecutive months.

The Blessed Virgin appeared to Sister Lucia again on December 10, 1925, at the convent of the Dorothean sisters in Pontevedra, Spain, with the Infant Jesus, saying: 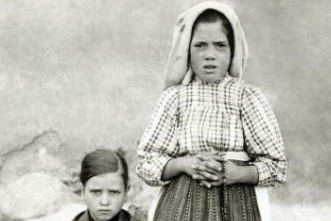 Sister Lucia personally received this devotion from the Blessed Virgin

“Look, my daughter, at my Heart surrounded with thorns with which ungrateful men pierce at every moment with blasphemies and ingratitude. You, at least, try to console me, and tell all those who on the first Saturday of five months:

* recite one mystery of the Rosary

* and keep me company for fifteen minutes meditating on the fifteen mysteries of the Rosary with the intention of making reparation to me, I promise to assist at the hour of death with all the graces necessary for the salvation of their souls.” 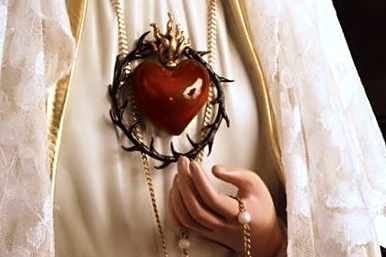 The Child Jesus again appeared to Sister Lucia on February 15, 1926. She explained the difficulty that had to go to confession on the first Saturday and she asked that confession made within eight days be valid. Jesus answered, “Yes, that it could be even more days provided that one receiving me is in the state of grace and has the intention to repair the sins against the Immaculate Heart of Mary.”

Many have had the same question that Sister Lucia made to Our Lord, who replied: “My daughter, the reason is simple: there are five kinds of offenses and blasphemies against the Immaculate Heart of Mary:

– Blasphemies against the Immaculate Conception

– Against Her Divine Maternity and, at the same time, refusing to recognize her as the mother of men

– The blasphemy of those who seek to sow in the hearts of children indifference, contempt or even hatred for this Immaculate Mother

Responding to the Blessed Virgin’s request, Heralds of the Gospel promote in whichever parish they can, the devotion of reparation to the Immaculate Heart of Mary on the first Saturday of every month.

The ceremony begins with a processional entrance of a statue of the Immaculate Heart of Mary, often preceded by the choir and orchestra in solemn dress.

The statue is crowned – normally by the ecclesiastical authority present or another representative of the public – and it is then taken to a place of honor in the center of the nave.

A young person is then asked to lead the congregation in praying the rosary, and, at the end of it, the whole church recites the act of consecration of the world to Mary made by Saint John Paul II.

Afterwards a Herald offers a meditation on the mysteries of the Rosary in accordance with the request of Our Lady to Sister Lucia..

The celebration of Mass and Holy Communion are, of course, the highlight of this devotion.  Throughout the entire event there are always priests available for the faithful who wish to go to confession.

At the end of Mass, the faithful will approach the statue of the Virgin for private prayer to entrusting a special intention or to simply touch her.

Mary loves us so much; she helps us constantly; she patiently bears our infidelities! She provides us through the devotion of reparation of the five first Saturdays of the month with the means to placate her heart wounded by the offenses of mankind and our own.

Do not allow our hearts to be hardened, let us not remain indifferent and throw ourselves at the feet of such a good Mother, and keep her company every first Saturday with fervor and devotion asking forgiveness for sinners and peace for the world.

So join with Heralds of the Gospel to spread this devotion and work to establish the “Communion of reparation” in the greatest number of dioceses and parishes, so that the world may be conquered for the Immaculate Heart of Mary!